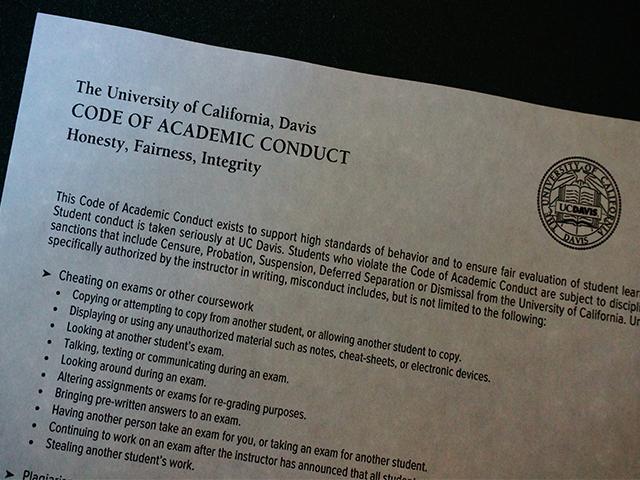 What are the rules governing academic conduct?

Dishonest acts include cheating during an exam, providing false information, claiming someone else's work as their own, working with other students on an assignment that is supposed to be done individually, altering a graded quiz and submitting it for re-grading are all examples.

Taking an action that gives a student an unfair advantage over others includes the above behaviors but also conduct such as providing false information to an instructor in order to be allowed to take an exam late or get an extension on a paper, or submitting the same paper for more than one class.  Most of these behaviors are also dishonest acts.

Behavior that creates the appearance of dishonesty refers mostly to conduct that is prohibited during testing even though it is not necessarily dishonest -- such as talking, passing notes, or using a cell phone. However, these behaviors are all prohibited during exams because they create the appearance that cheating is occurring, and this undermines trust in the fairness of the test.

Failure to follow course or exam rules may include behavior such as leaving the classroom without permission during an exam, or leaving with the exam when the test is over.

Conduct that disrupts or obstructs the educational environment could include consistently coming to class late, interrupting the instructor, pressuring the instructor to change grades, or failing to participate in small group work during class.